Read Online
September 17, 2019 marks the eight-year anniversary of the inception of Occupy Wall Street, a national movement for political and social change that spurred smaller movements in many cities around the United States, including Eugene, Oregon.

The Occupy Movement
After the inception of Occupy Eugene on Oct. 15, 2011, homeless and student activists alike crowded together to occupy Washington Jefferson Park in the Whiteaker neighborhood, fighting the muddy and cold conditions the nighttime hours brought. Rampant sicknesses plagued the occupiers, who chose to sleep in the park for many nights to protest the numerous issues the Occupy Movement sought to address, such as corporate money in politics and the lack of affordable housing. Their hard work paid off as many important organizations rose out of Occupy, including tiny house villages that look to help provide more affordable housing.
One of these activists was Sabra Marcroft. Marcroft, 52, a Eugene resident and community volunteer, not only joined the Occupy Eugene movement but also became active in many organizations that came out of Occupy. While Marcroft never stayed overnight at the occupied Washington Jefferson Park, she often went in the middle of the night when she couldn’t sleep to be part of the movement’s energy and became increasingly enthralled by Occupy’s message.
"[The march] went right in front of my house. Here were all these people, these beautiful people, marching, and I had to join them," said Marcroft. "I was looking around me, and I was seeing the first of what I was clear was going to become a wave of homeless old people, and I had some big ideas about what to do about the situation. I figured these were some people that might listen."

Tents and their inhabitants occupied Washington-Jefferson Park and downtown Eugene. Images retrieved from Occupy Eugene Media.
Occupy Wall Street, or the “Occupy Movement,” officially began in New York on Sept. 17, 2011 and was an influential movement for its time despite the somewhat conflicting interests and aims of its participants. While all were united with the common interest of abolishing inequality, particularly between rich corporations/socio-political authority (or “the 1%”) and America’s middle and lower classes (or “the 99%”), it seems the movement also elicited outrage against other forms of inequality. Some of these included homelessness, corporate greed, student debt and access to education, union/labor rights, health care, unemployment, and even extending to the environment and women’s rights. Inspired by similar movements but without a resoundingly clear aim or goal, the Occupy Movement became a sort of umbrella movement for inequality and a symbol for Americans’ frustration with a political and economic system still reeling from a major financial crisis just a few years previously.
Initiated by over 1,000 protesters gathered in New York City, within a few weeks Occupy had gained traction in Chicago, Oakland and even smaller cities like Eugene, Oregon. Here, the movement began in mid-October 2011 and moved its way through various locations and city parks, finally settling in Washington Jefferson Park. Occupy Eugene itself was fairly peaceful, even with more than 2,000 people in attendance, and, according to Marcroft, proved a force to be reckoned with when it came to occupiers who were eager for change.
Joining the movement to encourage collaboration around social issues and to share possible solutions to Eugene’s housing crisis, Marcroft was deeply interested in the movement’s aims and worked to help create something lasting.
"My primary focus is building resilience. We need strong community to be able to meet the challenges we already are facing and to face the ones that are in front of us," said Marcroft. "When conditions are really bad and people pull together, if they have the resources to keep supporting each other so they don't break down, then those can be the best times in the world."
Occupy Eugene, while influential, was seemingly just as disorganized as Occupy Wall Street due to the sheer number of topics it tried to cover. Marcroft also mentioned the disorderly nature of the general assemblies of protesters, reflecting on fights that ensued and the lack of effective leadership. While there was less police pushback in Eugene than in many other cities, Marcroft recalled police dropping off troublesome people at the Occupy encampment with the idea of driving out many of the occupiers. Eventually, due to disorganization, the movement in Eugene began to splinter into separate groups.
"I think the real heart, it's never died,” said Marcroft. “Things that Occupy Eugene sparked and got started are influencing the way things are done all over the country, and other countries, in terms of being helpful and solving problems around homelessness and poverty."
With pressure from the city to leave the parks and riversides following Occupy, the homeless were left with nowhere to go. Shortly after the Occupy encampment was disassembled, the mayor of Eugene at the time, Kitty Piercy, brought together a task force to find solutions for the housing crisis. Marcroft, joining this task force, began working on a project incited by Occupy: Opportunity Village.​​​​​​​ 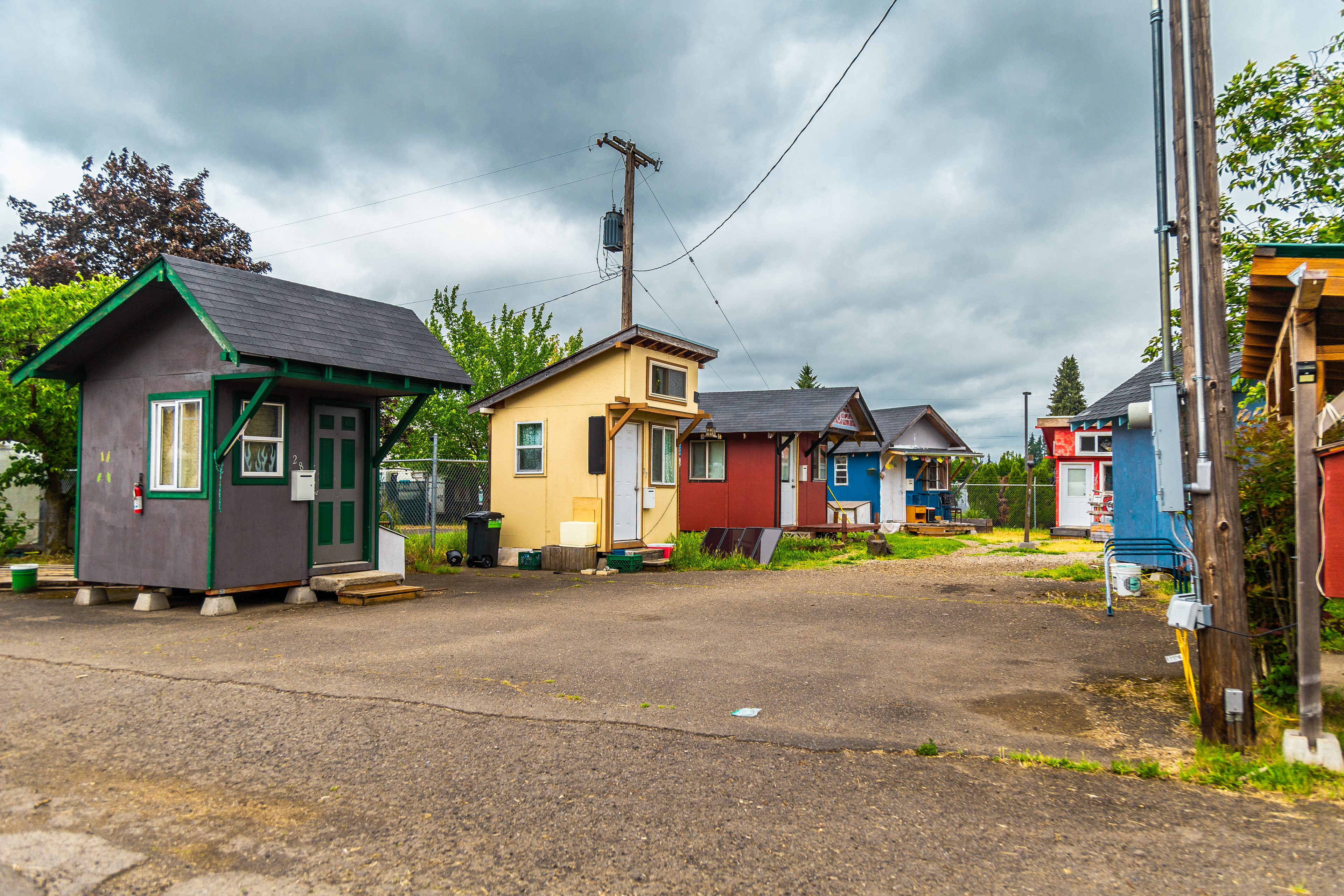 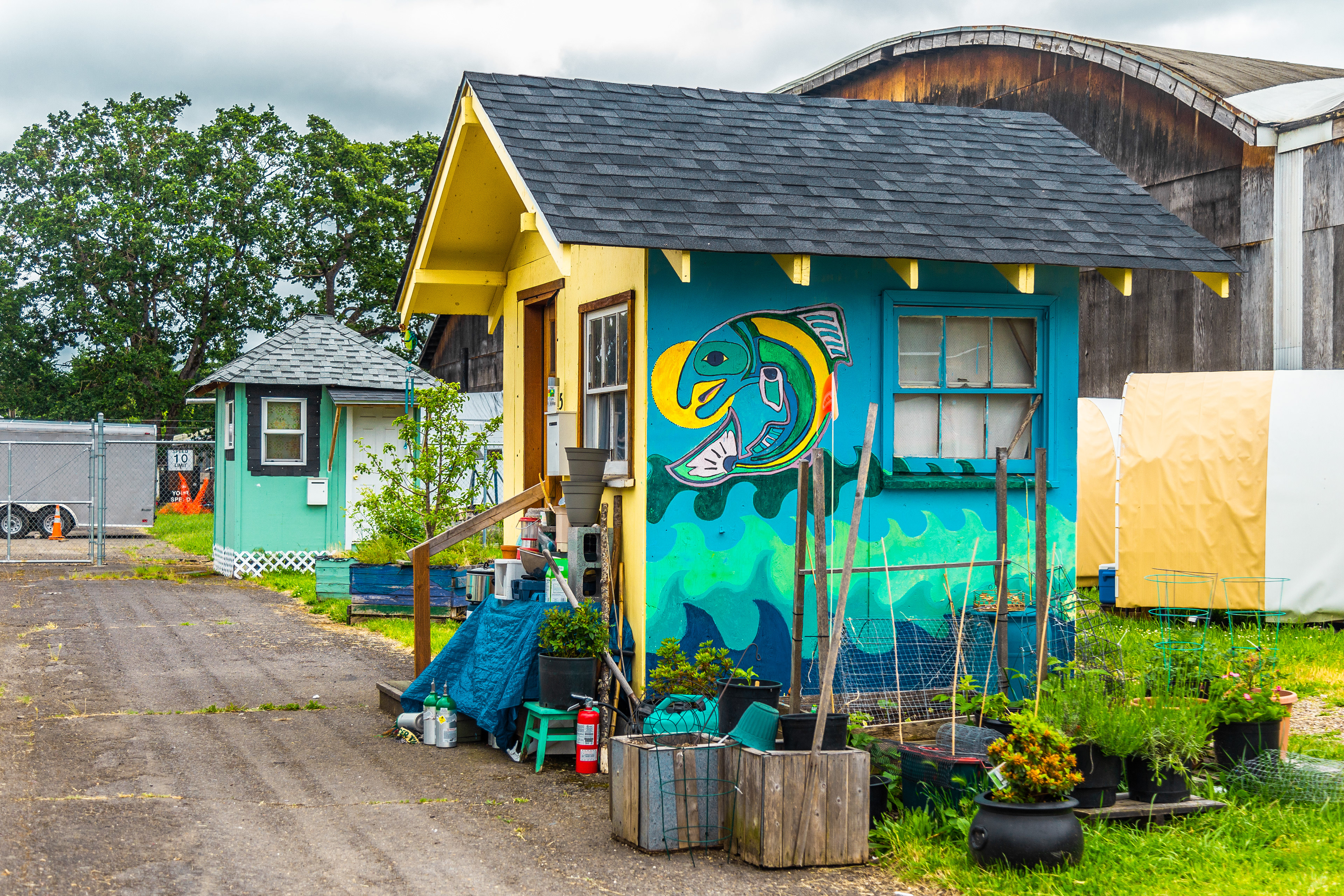 Opportunity Village, operating since 2013, has over 30 tiny homes for individuals in housing transition.
Square One Villages
Sprawling around a small plot of land in industrial West Eugene, bright colors and hand-painted murals characterize the tiny houses and shared facilities of the village. Protected by a gate house, the land and leading gravel road gives way to small homes large enough for a bed and some personal belongings. Residents are able to visit the community yurt, which houses a television, board games, and coffee in the mornings.
While it took a few years to get up and running, Opportunity Village, one of three villages owned by Square One Villages, became a functioning tiny house community for people in need of transitional housing. Made up of 29 units, the village can support over 30 residents and puts no time limit on how long they can stay. Each resident or couple has their own bed space, and bathrooms and living spaces are shared by all residents. 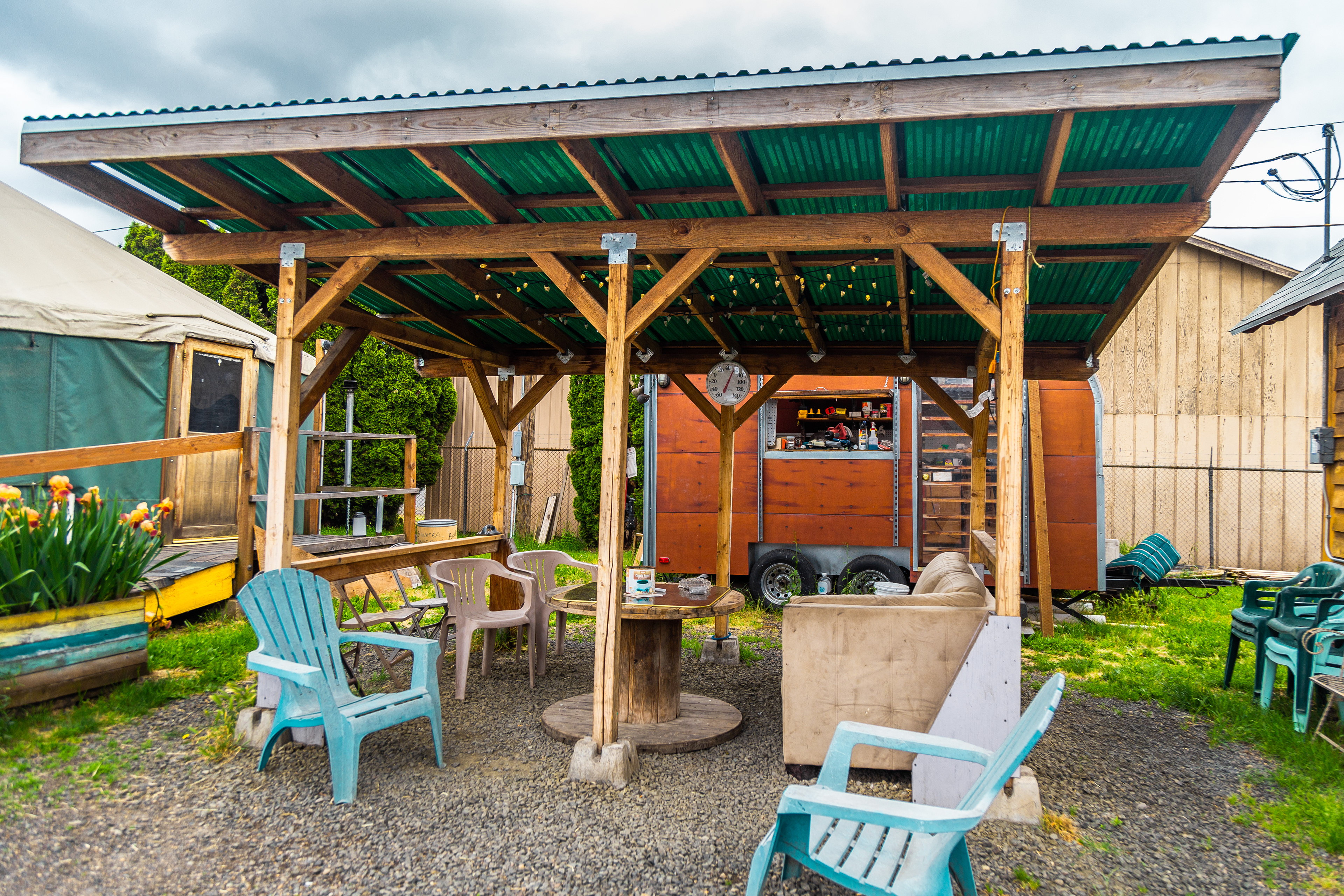 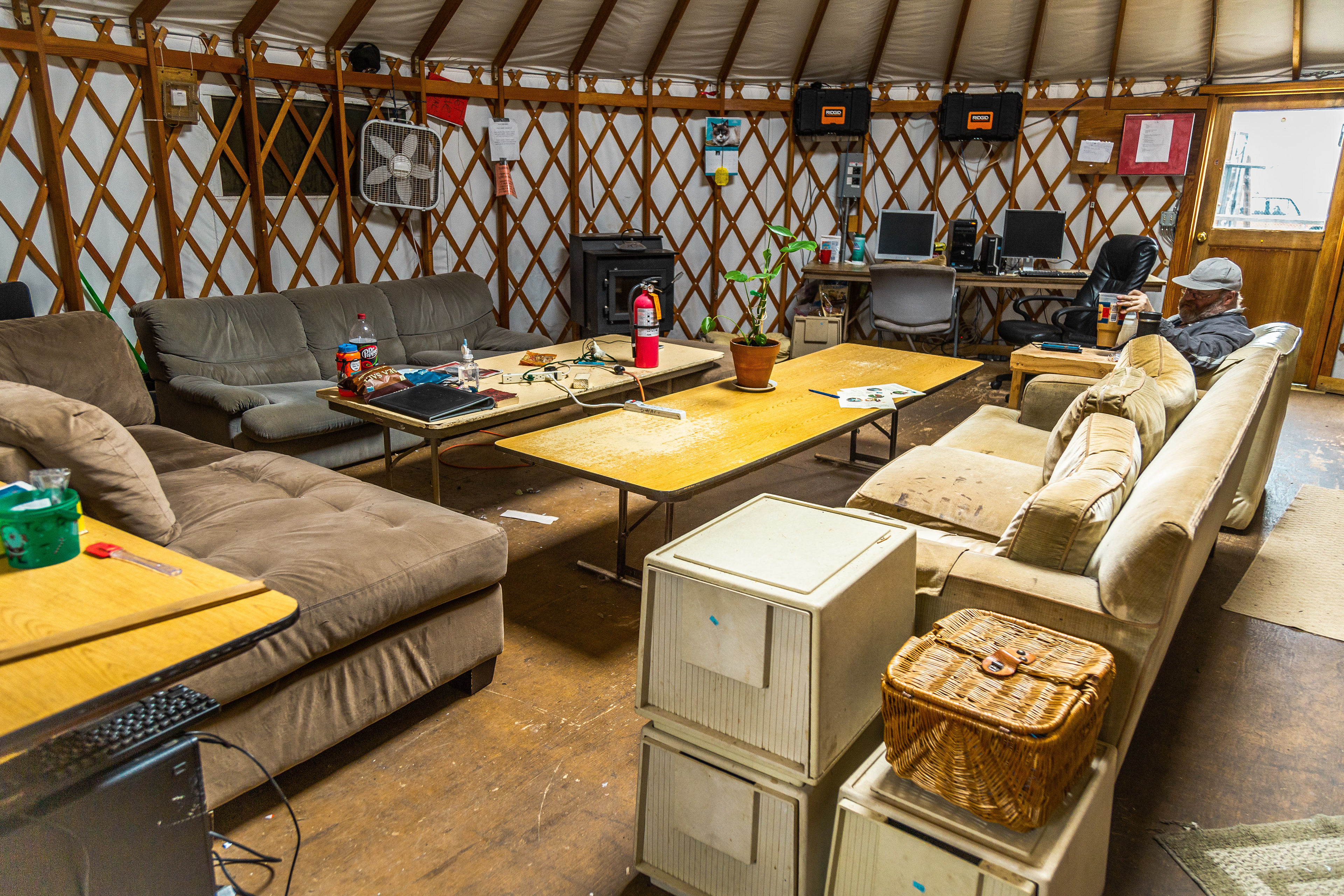 Community buildings and spaces offer residents resources as well as a place to organize and relax.
Welcoming their first residents to Opportunity Village in May 2014, Square One Villages was founded with the idea of creating eco-friendly, self-managed tiny house communities that provide a housing option for low-income residents of Eugene. In addition to Opportunity Village, Square One Villages is in the process of fully developing two other tiny house villages in Oregon: Emerald Village – which is only a mile from Opportunity Village in Eugene – and Cottage Village, their newest endeavor in Cottage Grove.
"This is a stepping stone. The way that the housing market here has gotten to be is that rent is so high for so many people that we're experiencing a major homeless problem,” said Raquel Diaz, Village Coordinator. “Affordable housing is becoming a problem in the whole country.”
Each week, residents of Opportunity Village participate in a variety of beautification tasks around the property and man the gatehouse to hand out applications and welcome visitors. Because Opportunity Village is not technically considered a shelter by the city, residents can still qualify for assistance such as the Oregon Health Plan and food stamps. The village also receives a weekly donation from Food for Lane County, which helps fill the village pantry with nonperishables that residents can sign for and check out when they’re hungry. Opportunity Village runs mainly on donations and by charging residents a $35 program fee that is paid annually each June.
Despite help from other organizations in the community, Diaz says Opportunity Village would benefit from additional support in order to improve the residents’ stay but also further assist them in transitioning to a more permanent housing situation.
"I think if there was more funding for resources -- things like behavioral health -- and just having more staff, that would be really beneficial for the villagers and helping them work towards their goals and whatever help they might be needing,” said Diaz.
Similar to Opportunity Village, Emerald Village is a more permanent housing situation for those with minimal income. Consisting of 22 tiny homes commissioned by a variety of local architects as well as lush lawns and a community building that is currently under construction, Emerald Village allows residents to be part of a housing cooperative and pay minimal rent fees. Residents of Emerald Village pay anywhere between $250-$350 per month as a carrying charge and a $50 membership fee every 30 months, said Diaz. Villagers join different committees – titled Membership, Admin, Outreach, and House and Grounds – to assist with the various duties around the community.​​​​​​​ 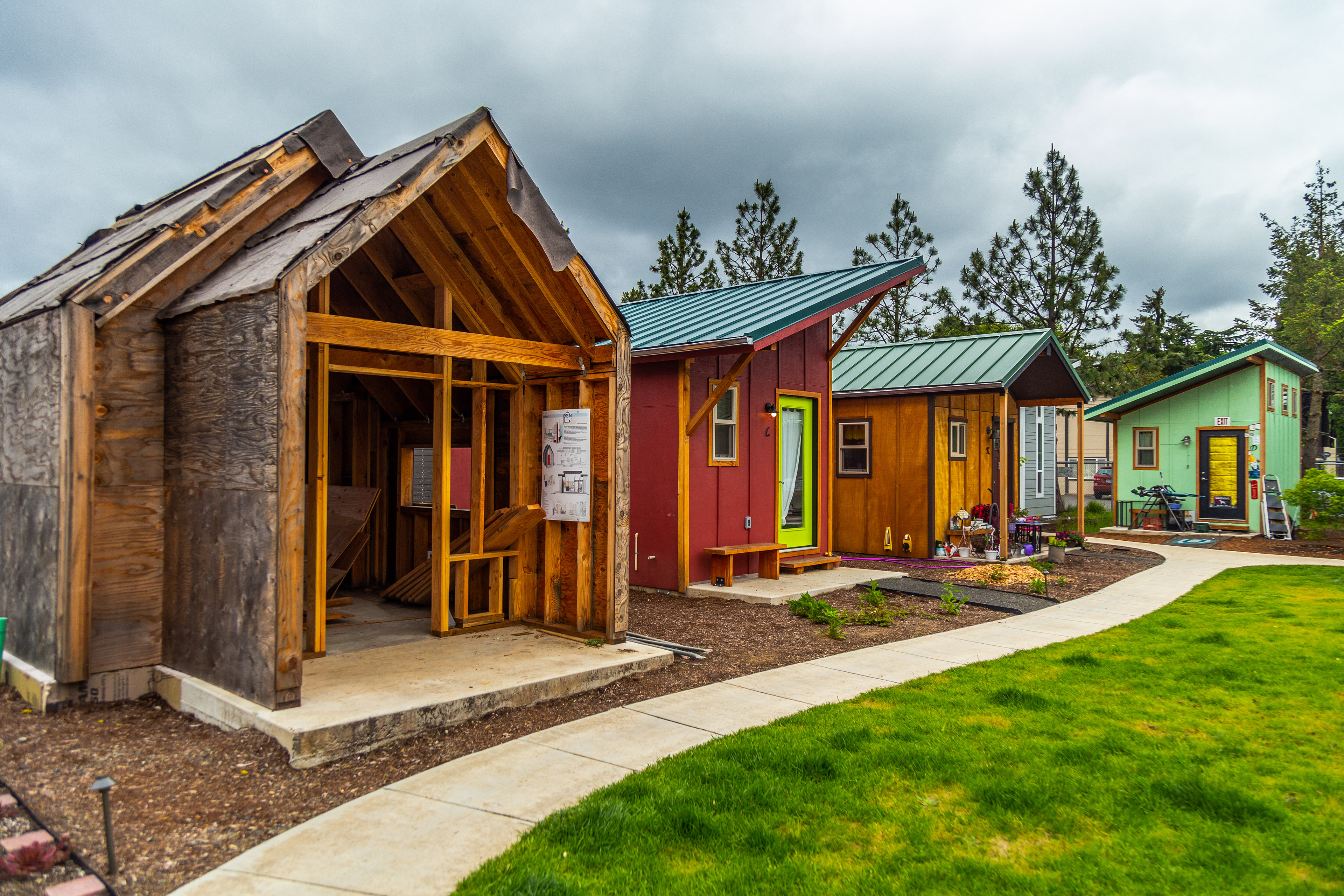 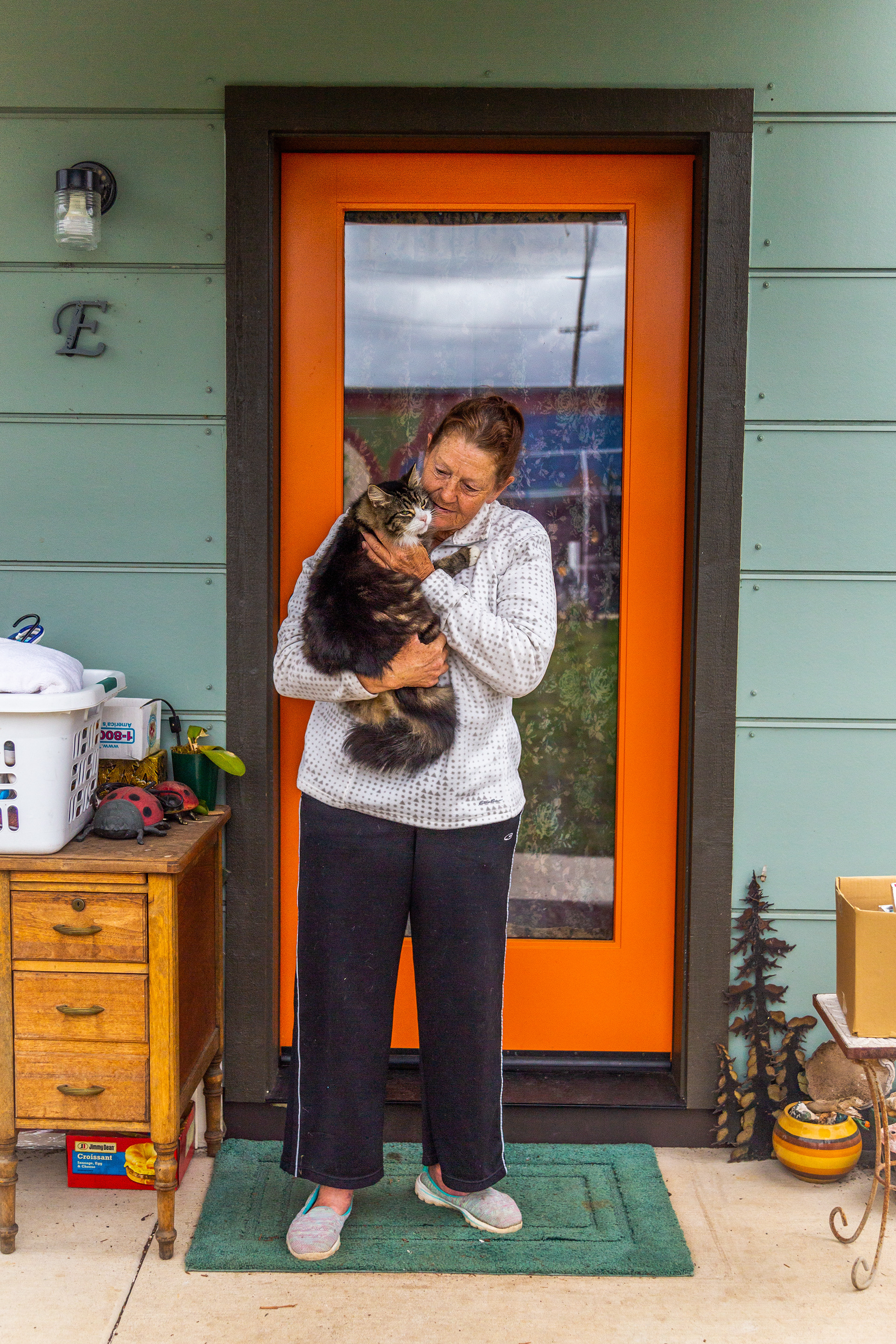 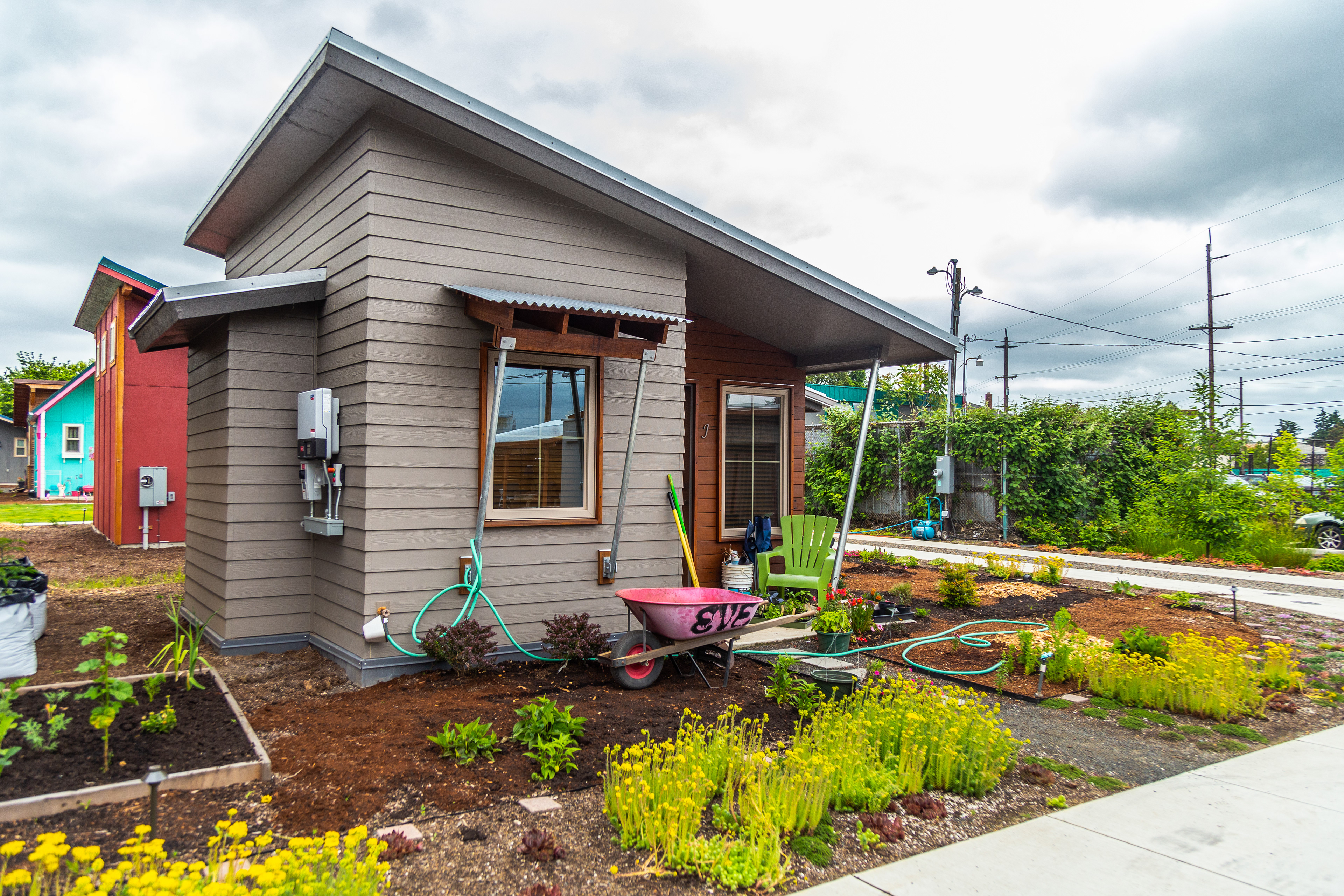 Tiny houses in Emerald Village are commissioned by various local architects. Most house single residents or couples.
In addition to Square One Villages’ tiny houses, many other organizations in the Eugene area that came out or grew because of Occupy are still in operation today, including Nightingale Hosted Shelters, which also provides transitional lodgings for the unhoused; Occupy Medical, a free medical clinic geared towards those without health insurance; and Burrito Brigade, a group that hand-delivers free vegan meals to the homeless.
With the plethora of organizations that Occupy roused, it’s clear the movement provoked and continues to encourage necessary measures to combat the issues brought forth by the lack of affordable housing. According to City of Eugene data, there were 1,905 homeless individuals in 2012, one year following Occupy, and only 1,451 homeless individuals in 2016, four years following Occupy. While there are other factors that may have had a hand in this dramatic drop, perhaps the most apparent is the emergence of shelters and organizations full of volunteers looking to help out. While homelessness in Eugene is far from being eradicated, it is clear that a movement like Occupy was what the city needed to begin seeking solutions.
Eight years following Occupy, the movement demonstrated that the ideas and pressures of a large body of people – even on a local scale – are influential in creating positive change. Despite these victories – which should be celebrated – there’s still a long way to go when it comes to providing more affordable housing.
"We're going to need mass movement. We're going to need every pair of human hands that we can get over the next 50 years,” said Marcroft. “Help each other as we can, learn as we go along."

Branching Out: The Story of Michael Garnier's Treesort
Feature Story